Sorry, but you do not have permission to view this content.
* You don't have to take part in the trading of fish. It's just like the stamps, something for people to do.

I put a lot of effort in the specials. I'd really appreciate if people would use them like they're intended without cheating by using technicalities.

If you don't like the game, don't play it, and don't go against it.

What's Covered Here
Whaaaat??
FAQ
I still don't get it
About males / groups


Whaaaat??
Each female betta sold in the Sapphire shop has a code in its Pet Profile that is meant for one of the four groups below.

In these four groups, are male betta fish. You can pick any male from the code's group, enter the code, and you claim the male. It'll be removed and a download will commence.

Bought a female betta with a code from a group you don't want? You can trade her with someone else for one that has a code from the group you want.

You cannot trade any male you claim below.

You cannot use any code of any female betta you don't own. You're trading the fish, not the codes. I'm not going to be on the lookout but if I see people not playing the special as it should be, I'll just block them from the betta and Sapphire pages til they get themselves a lawyer.

FAQ
- Can't people cheat and give out their codes?
Maybe at the beginning; Yup. Losers. There IS log data for now, and in the future there will be more security to prevent cheating.

- If I want to keep the fish but not the code, can I give the code away?
No.

- Can I trade the fish with someone, use the codes, and trade them back?
No that's lame. You gotta give up the fish if you don't want the code.

- Can I trade female Dumbo fish from Group 4?
I'll say yes to make it easier to remember "only trade females". Dumbo females won't have codes though, since they're from Group 4.

I still don't get it 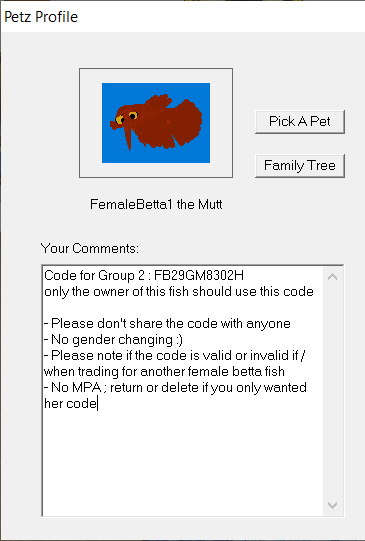 You didn't know before buying, but now you see this betta fish has a code for male betta fish in group 2. 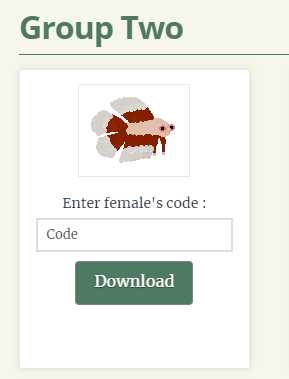 (style subject to change, this is a screenshot from a scratch page before it was coded)

Don't want any male from group 2? Think you can give up the female fish you bought? Trade her with someone who has one with a code from the group you want.

Don't want any male from group 2? Can't give up the female fish you bought? Then ignore the code and buy a new female.

Groups do restock. If you don't like any in the group your code is for, you could always wait and see what might come up later.